Civils contractors today said that the Government’s decision not to proceed with the HS2 Eastern Leg and full Northern Powerhouse Rail programme will be ‘a missed opportunity’ for the British economy.

Writing in The Yorkshire Post, the Prime Minister indicated that what he described as a £96 billion programme of investment will not include the planned HS2 Eastern Leg to Leeds. He also made no mention of including Bradford on a new Northern Powerhouse Rail route between Leeds and Manchester.

Commenting, Director of External Affairs for the Civil Engineering Contractors Association (CECA) Marie-Claude Hemming said: “We welcome investment in upgrades to rail in the north, but it is a missed opportunity that the Government has failed to grasp the transformational potential of the full HS2 Eastern Leg and Northern Powerhouse Rail plans.

“It is vital that any investment now acts as a stepping-stone to future investment in the north, and does not block the chance to deliver these schemes at a later date.

“One key section of Northern Powerhouse Rail alone could deliver a £22bn boost to the Northern economy by 2060 – nearly £8bn more than previously forecast – according to a new report from global engineering consultancy Mott MacDonald.

“A new high-speed rail link between Leeds, Bradford and Manchester could potentially increase productivity by 6% (equivalent to £16.5bn), raise the employment rate by 1.5% (equivalent to £5.5bn), and increase gross value added (GVA) in the North by about 8% over 10 years.

“The Government’s levelling-up agenda must include a step-change in infrastructure delivery in the north of England, and the decision to scale-back these plans can only hinder its stated intention of delivering a more balanced UK economy in the longer term.

“We will review the full plan once it is published to understand what it will mean for industry, and how we can work with Government to optimise the benefits of what is proposed.” 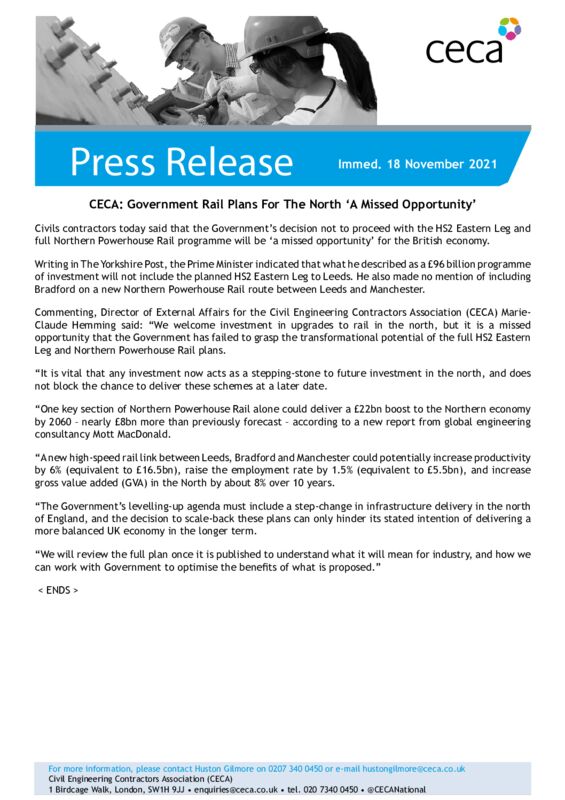