Civils contractors today said that the decision of the UK Government to progress with HS2 heralds a ‘new dawn’ for the UK infrastructure sector.

Commenting, Director of External Affair for the Civil Engineering Contractors Association (CECA) Marie-Claude Hemming said: “After months of uncertainty, we applaud the Government’s decision to give the green light to HS2.

“This is an infrastructure project on a scale of ambition that can only be matched in our country by the achievements of the Victorian generation in building our railways in the first place.

“HS2 will be transformational to the economy of the UK, and will be used by generations to come. It will not only deliver a step-change in rail capacity, but will help in the fight against climate change, offering a cleaner, greener way to travel, with significantly lower carbon emissions than equivalent car journeys or domestic flights.

“CECA has long argued that HS2 must be delivered alongside Northern Powerhouse Rail and Midlands Engine Rail to deliver world-class connectivity for 21st century Britain.

“Now that the Government has given the green light to this once-in-a-generation scheme, we look forward to working to ensure that its full benefits, and of other necessary improvements to our rail infrastructure, are brought forward by getting spades in the ground without delay.

“The decision to go ahead with HS2 heralds a new dawn for the UK’s infrastructure sector. Our members look forward to putting the uncertainty of the past behind them, and delivering this game-changer of a scheme.” 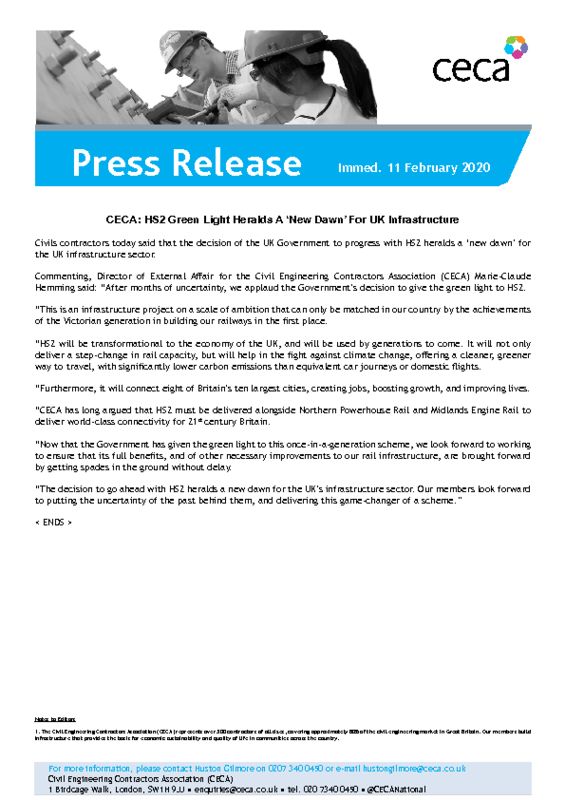