Civils contractors have said that industry is poised to deliver on the new UK Government’s commitment to infrastructure, made this morning (19 December) in the Queen’s Speech at the State Opening of Parliament.

Commenting, Director of External Affairs for the Civil Engineering Contractors Association (CECA) Marie-Claude Hemming said: “We welcome the new UK Government’s commitment to infrastructure, and eagerly await further details of the Government’s plans in this regard.

“While there was little detail in the Queen’s Speech on specific projects, the new Conservative majority government has come to power on the back of extensive promises of future infrastructure investment in all parts of the UK.

“We have long argued for more gross public funding support for infrastructure that meets the 1.2 per cent of GDP fiscal remit set for the National Infrastructure Commission, and examining the case for higher social and economic outcomes if this was to be raised.

“The UK Government must act now to ensure shovel-ready projects move forward to delivery if we are to secure the economy ahead of leaving the European Union at the end of next month.

“However there are a number of major decisions that await in Prime Minister Boris Johnson’s inbox, not least to determine the future of HS2, Heathrow expansion, and the new roads investment strategy.

“We would like the Prime Minister to seize the bull by the horns, guarantee these schemes as expeditiously as possible, and unleash the ‘infrastructure revolution’ his party has promised.” 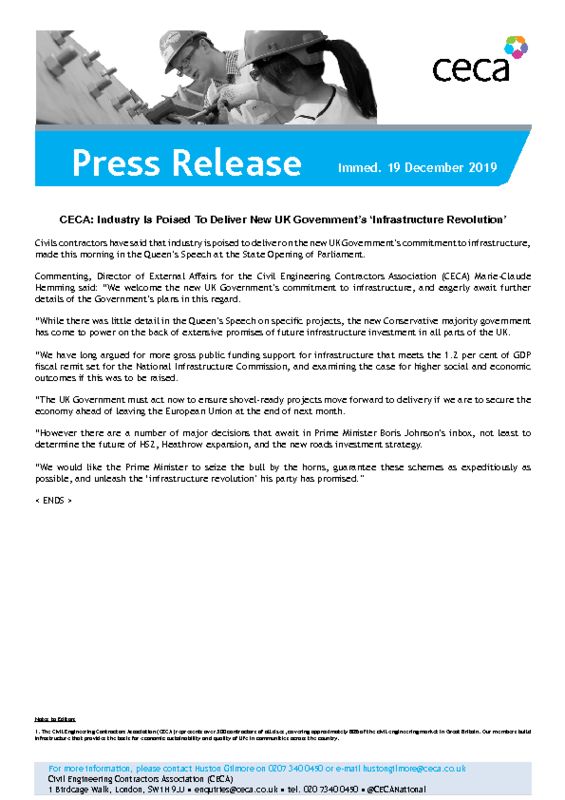