Civils contractors have warned that the new points-based immigration system the UK Government plans to implement from next January will create labour market pressures for employers.

Commenting, Chief Executive of the Civil Engineering Contractors Association (CECA) Alasdair Reisner said: “The UK’s construction sector already relies on a large number of migrants – the make up roughly one in ten of all workers in the industry, and up to half the workforce on some sites in London.

“It is to be welcomed that the Government has shifted its position on the skill level required for entry, from requiring degree-level to the equivalent of A-level education, and a salary threshold of £25,600.

“In areas where the construction industry relies on migrants, wages are already well above this level for most roles.

“The challenge for industry will hence focus on the skills requirement for entry. It is good news that many skills the industry requires – such as those possessed by quantity surveyors or civil engineers – are well above the threshold.

“Nonetheless there are areas of concern in some trades. For instance, groundworkers, construction operatives,  highways maintenance operatives, and plant operatives, will struggle to meet these new criteria. These are all roles that industry needs to fill if it is to deliver the planned pipeline of infrastructure investment.

“With an economy that is close to full employment, it is unclear where industry will be able to recruit from for roles that do not fulfil these new criteria from the domestic market in the immediate future.

“In addition, many SMEs, which make up the vast majority of the UK’s construction industry, will now have to sponsor new entrants for the first time, working in an unfamiliar system.

“We believe further work needs to be done to ensure that industry is prepared for this new system, and to guarantee that employers in the infrastructure sector will be able to recruit new entrants at a sufficient rate to deliver the forthcoming ‘infrastructure revolution.’” 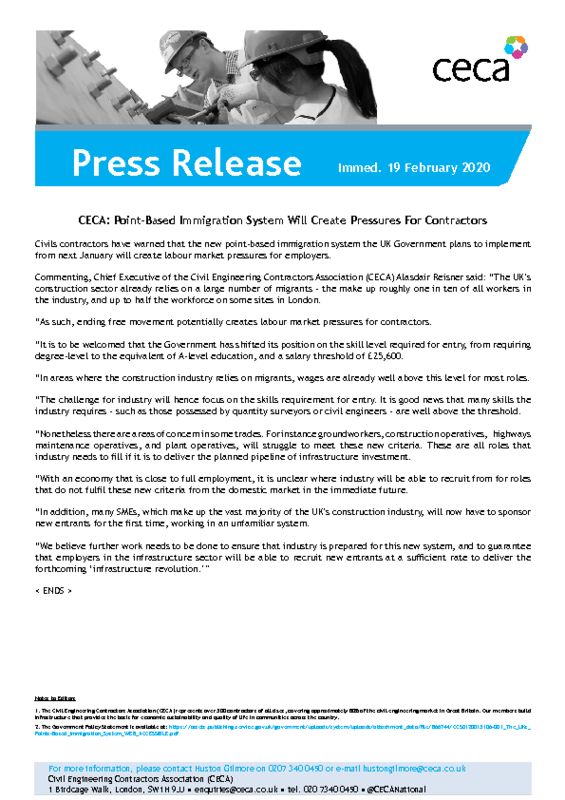