Civils contractors today welcomed the launch of Heathrow’s statutory consultation on airport expansion, saying it is vital to move ahead with the project to boost the UK’s economy once it leaves the EU.

A twelve week consultation will allow the public an opportunity to provide feedback on Heathrow’s plans, including the planned new runway and other airport infrastructure, such as terminals and road access.

Heathrow’s expansion plans include new measure to reduce emissions, its preferred plans for noise respite, and a proposed ban on scheduled night flights.

The Airport Expansion Consultation also includes plans for the airport’s growth to be undertaken in phases, with a new runway due to open in 2026 to a conclusion of the overall plan by 2050.

Commenting, Chief Executive of the Civil Engineering Contractors Association (CECA) Alasdair Reisner said: “Addressing Britain’s airport capacity gap will be fundamental to ensuring we remain globally competitive in terms of trade after Brexit, as well as boosting economic growth across the whole of the UK.

“Currently, the capacity gap is costing the UK an estimated £1.2 billion a year. We welcome the opportunity for consultation, and look forward to the significant benefits Heathrow expansion will deliver in securing post-Brexit economic growth.” 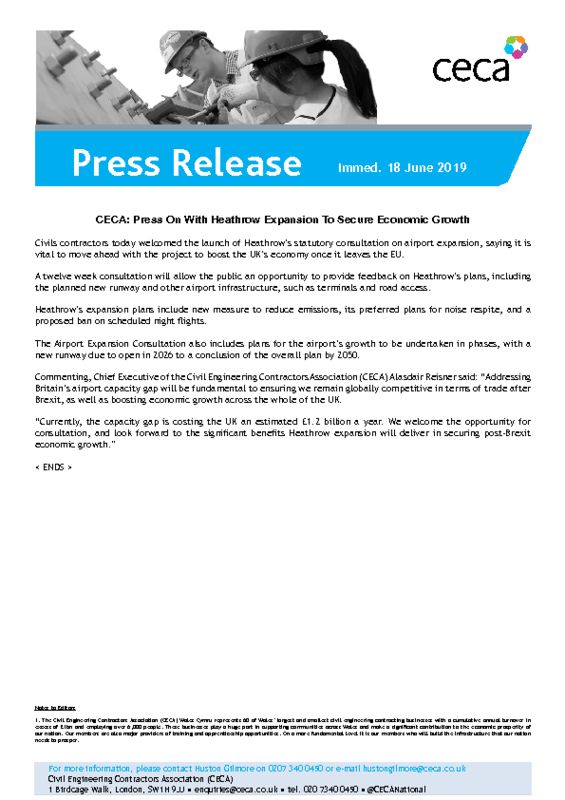