Civils contractors have warned that axing the rebate on red diesel in two years will still hammer many contractors.

In his Budget speech to Parliament Chancellor Rishi Sunak MP announced he would ‘level up’ the UK by ‘getting Britain building’, but also announced that the rebate on red diesel will end in 2022.

Commenting, Director of External Affairs for the Civil Engineering Contractors Association (CECA) Marie-Claude Hemming said: “While we are glad that the Chancellor has listened to industry evidence that immediate implementation would have a catastrophic impact for many businesses across the construction sector, particularly our SMEs, the planned implementation period of two years will not be enough for many businesses, such as those who are on long-term frameworks with fixed pricing.

“For many of our members, there are no readily available low-carbon fuels or construction plant that use alternative sources of energy, and the impact of increased fuel costs will ultimately be passed on to customers.

“This change will also lead to a significant escalation in fuel theft, as there will be no way of distinguishing between gas oil and diesel used by road vehicles, and it is likely criminals will seek out construction plant as an easy target.

“It is to be hoped that where the Government is a buyer on long term frameworks, it will look at how it can support its suppliers when we transition to the new rules.

“We look forward to engaging with Government on this issue, to help them further understand the implication of this change for the construction sector in all parts of the UK.

”Commenting on announced investment in roads, Ms Hemming said: “It is good that the Government is investing in our infrastructure with £27 billion more for our roads between 2020 and 2025.

“Against suggestions that the Government’s planned roads investment strategy was to be delayed, the Chancellor has recognised the vital importance of investment in our national networks. We hope to see further announcements later this year on other crucial schemes, such as High Speed North.” 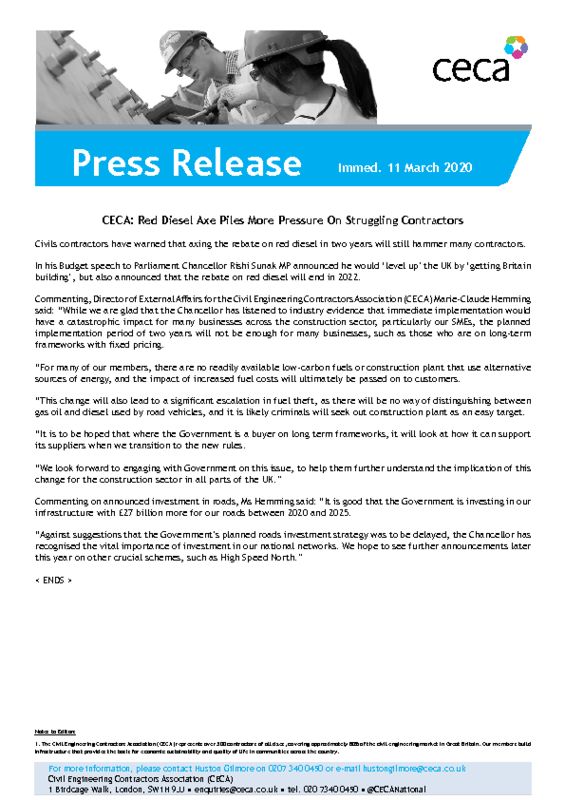