Civils contractors today said that news that twelve new renewable energy projects will be commissioned following the latest round of the UK Government’s Contracts for Difference scheme is a major step towards delivering the mixed portfolio of low carbon energy generation the UK requires.

The new projects are to provide an estimated 6 gigawatts of capacity, powering over seven million homes and creating up to 8,000 jobs. The projects involved in the schemes will include offshore wind, advanced conversion technologies, and remote island wind generation.

Commenting, Grahame Barn, Chief Executive of the Civil Engineering Contractors Association (CECA) Scotland, said: “We particularly welcome the four onshore wind projects that are to be built on Scotland’s islands, which will be a great economic, social and environmental boost for communities in Orkney and the Western Isles.

“CECA has long argued that the UK requires a mixed portfolio of low carbon electricity generation to both keep the lights on and its carbon commitments.

“The UK boasts the greatest potential of any European country for wind power, and we are delighted that the UK Government has recognised that investment in renewables is a vital aspect of delivering the clean energy Britain requires.

“In particular, it is gratifying to see the recognition of remote onshore wind schemes as a key resource in the UK’s future energy mix.

“These projects will not only generate a sustainable source of electricity, but will deliver a substantial boost to the economy, unlocking job opportunities in remote areas of Scotland and attract investment over a substantial period of time.

“Today’s announcement shows that this will not only be good for the environment, but will create the jobs and economic growth communities and businesses rely upon.

“However, if the UK Government is to achieve the ambitious target of achieving net zero emissions by the middle of the century, further investment in renewable and low carbon electricity generation will be required.

“Although today’s announcement is a boost for those communities set to benefit, it will nonetheless be disappointing for island communities in Shetland, which is set to miss out unless further schemes are announced.

“That’s why CECA will continue to make the case for further investment in renewables to ensure the Shetland Islands can also compete effectively in the green energy market.” 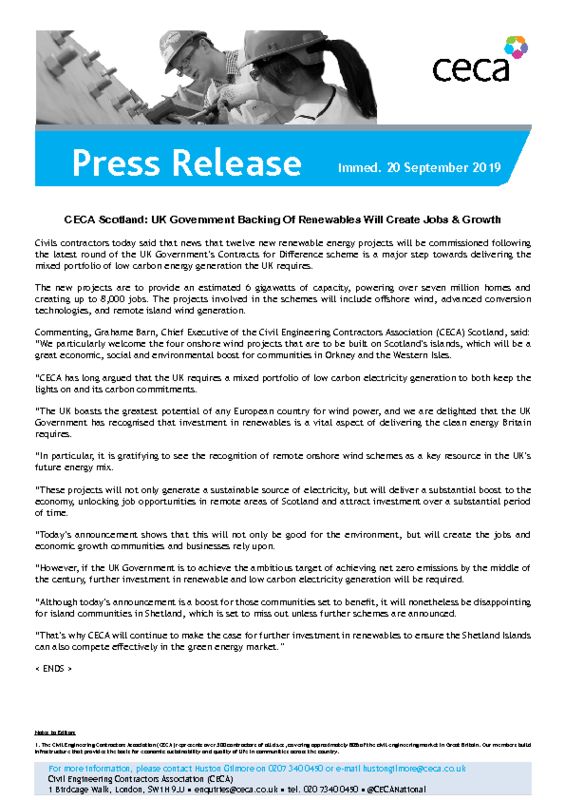