Civil engineering contractors today welcomed the publication of a long-delayed review of Britain’s railways by saying that the Government’s planned reforms will deliver better outcomes for passengers.

Great British Railways: The Williams-Shapps Plan for Rail sets out a strategy to reverse the fragmentation of the UK’s rail system that has characterised it since privatisation, replacing Network Rail with a new public body, Great British Railways, which will act as “the single guiding mind and leader that the railways currently lack.”

“We believe that the supply chain will play a significant role in delivering optimal outcomes for passengers.

“To do this it is important that the reforms are delivered without disruption to existing planned investment to the network as it looks to the future after COVID-19. The supply chain can deliver most efficiently where there is consistency and continuity of work, rather than stop-start approaches as new policy is implemented.”

“The UK Government was right to step in to support the nation’s railways during the pandemic, which are vital to the health of our entire economy.

“Now that the sector is looking to the post-pandemic future, these reforms will enable the supply chain to deliver a network that is fit for the needs of the 21st century.

“In particular, we welcome the creation of simplified structures of decision-making that will do much to end adversarial practices between organisations working on the UK’s rail infrastructure, something that CECA has campaigned on for many years.

“We look forward to working with Government, our members, and all stakeholders, to ensure that the UK’s rail system continues to be upgraded and maintained to a world-class level, to the ultimate benefit of rail users and the UK tax-payer.” 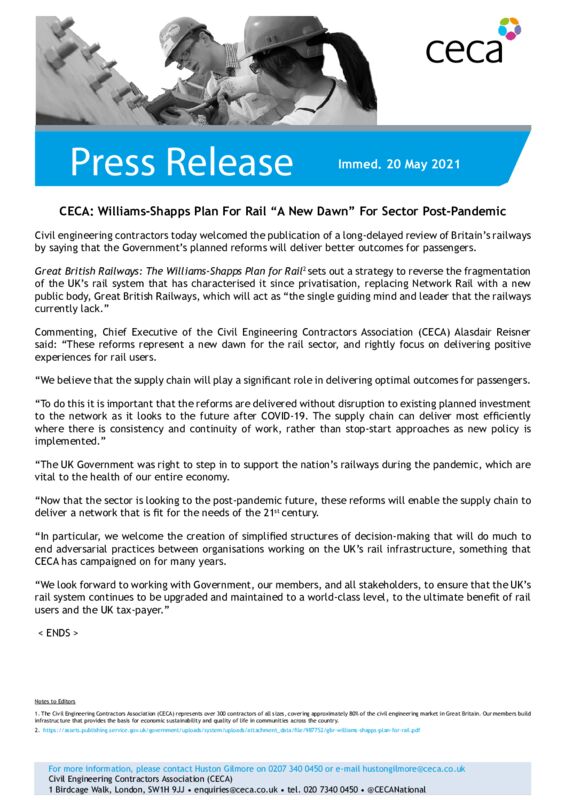