Leading construction bodies have called for united action between industry and Government to address skills pinch-points.

Nine industry federations and representative bodies have jointly called for collaboration to boost availability of occupations in greatest shortages including site supervisors, operatives and quantity surveyors.

The roles have been identified through research from across the members of each organisation and the wider industry as those that are hardest to recruit for. They are vital to the delivery of projects nationwide.

The groups recommend that wherever possible, steps should be taken to recruit for these roles within the UK, bringing in new workers or upskilling the existing workforce. Where this is not possible, it is proposed that the Government add the roles to its Shortage Occupation list as part of its current review of migration as the UK leaves the EU.

Additions to the Shortage Occupation list would allow these roles to be prioritised in future migration from the rest of the world, helping industry to fill these essential roles.

Suzannah Nichol MBE, chief executive at Build UK said: “Construction projects across the UK are being held back by a shortage of suitable skills. This survey provides vital evidence of the specific roles which must now be considered by the Government for inclusion on the Shortage Occupation list ensuring that we can keep Britain building.”

CECA chief executive Alasdair Reisner said: “Speaking to companies from across UK construction we have identified some key roles where recruitment is already very difficult, or where it will become so once migration from the EU is reduced post-Brexit.

“We believe that it is crucial that we work together, as an industry and with Government to target these shortage occupations, boosting recruitment and training in the UK, while looking to sensible migration from the rest of the world to meet additional demand.”

Patrick Cusworth, head of policy and public affairs at the CIOB, said: “We recognise that the construction industry in the UK needs to be more ambitious in terms of recruiting, training and developing more people than it currently does.

“However, research has shown that in the short-to-medium term the industry needs to be able to continue to access migrant labour in a number of key professions such as construction and project management and a number of site-based roles.

“If we are to deliver ambitious housing and infrastructure targets and deliver the quality and high standards people expect, then we must ensure that we have the flexibility in place to recruit to these roles, while at the same time taking a longer view on recruitment and retention in the UK construction industry.”

George Lee, CEO of the Highways Term Maintenance Association, said: “The Government has committed to supporting economic growth through improved highways infrastructure, however, the survey and report into shortage occupations exposes the need for highways sector employers to be able to access more skilled and semi-skilled labour in order to deliver Government’s ambitions. In short Government needs to ensure that its skills and migration policies are aligned if it wants to deliver on its roads agenda.”

Richard Beresford, chief executive of the National Federation of Builders, said: “The industry working together has produced a clear picture of where the construction industry will lack skills. It is vital we continue to work together to improve capability in these areas and with Government to ensure that skills is part of a comprehensive immigration scheme.” 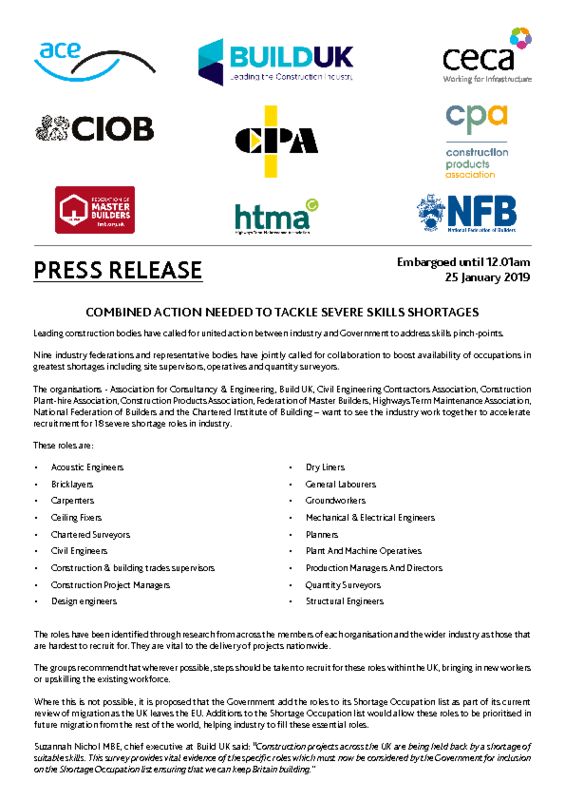