Infrastructure contractors are starting to see a dramatic shift towards recruitment of apprenticeships according to new data published today.

The Civil Engineering Contractors Association’s annual training and development survey has shown a huge jump in the number of apprentices, up 40 per cent in 2017 with numbers expected to rise by a further 32 per cent this year.

However, while graduate recruitment in 2017 also grew (up 37 per cent), firms also said that they had cut programmes and expected numbers to fall by 31 per cent this year.

These figures seem to indicate that the UK Government’s much criticised reforms to apprenticeships are now having an impact on the sector. It also means that contractors appear to be bucking the trend for the wider economy, which has seen a steep reduction in the number of apprenticeships.

CECA chief executive Alasdair Reisner said: “Our members have battled through a lot of bureaucracy that has arisen with the introduction of the Apprenticeship Levy. However these firms have also told us that they see apprenticeships as one of the best routes to bring vital new workers into the sector.

“It is great news that their efforts are now showing dividends, with a significant and apparently sustained growth in apprenticeship numbers.

“Over the coming year, CECA will be working with our members to further streamline the process, supporting members with engagement with providers and offering opportunities for smaller businesses to work together to recruit apprentices. 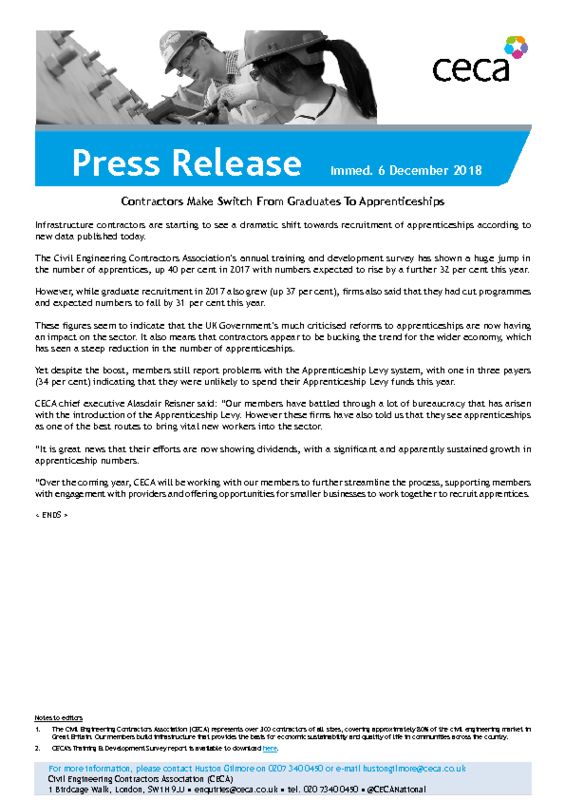