After two years of falling workloads, figures released today by the voice of Scotland’s civil engineering contractors, CECA Scotland, show that workloads are finally on the rise in Scotland’s civils sector.

CECA’s latest Workload Trends Survey for Scotland, which has been published quarterly since 2005, has found that workloads in Scotland rose according to 27% of firms on balance, the first increase since 2017 Q3. This is in contrast to the rest of the UK, where both workloads and order books fell in 8 of the 10 sectors covered by the survey.

However, despite this positive news, civils contractors remain concerned about the future outlook for the sector. No Scottish firms, on balance, reported that orders had risen. 6% of Scottish firms expected workloads to decline over the next year and 25%, on balance, expected a fall in new work orders. Employment declined and costs are also reported to have risen.

Commenting on the findings, CECA Scotland Chief Executive, Grahame Barn said: “We are obviously pleased that after two years of declining workloads, there are signs of light at the end of the tunnel however we remain concerned about the future outlook, given that ordered books remain stubbornly static.

“These are challenging times for the civils sector and with the ongoing uncertainty around not just Brexit but the future infrastructure pipeline in Scotland, we will continue to make the case for investment in infrastructure to be the top priority for both the Scottish and UK Governments.” 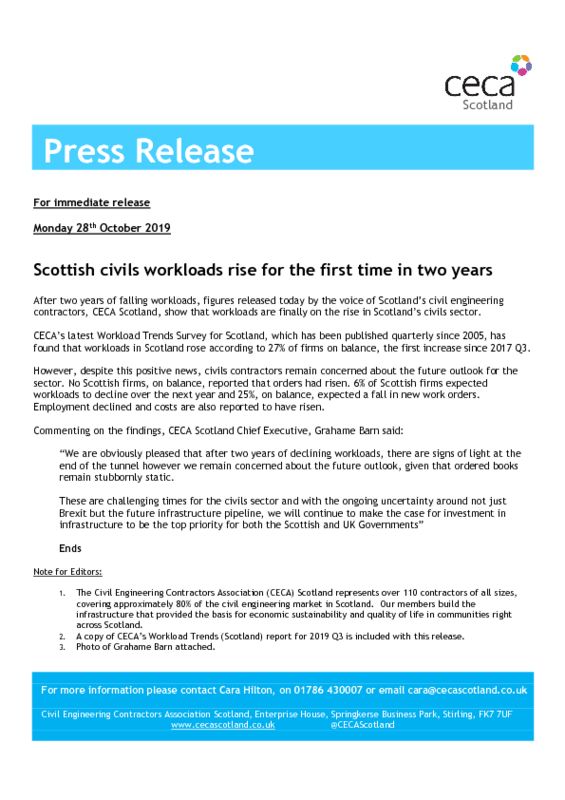