The companies who build the UK’s infrastructure have seen workloads slow at a faster pace than at any point since the last recession as widespread delays to projects start to bite.

The UK Government has regularly touted its commitment to invest in infrastructure, promoting a pipeline of more than £600 billion of investment in more than 700 projects nationwide.

Yet the Civil Engineering Contractors Association (CECA), which represents companies that undertake more than 80 per cent of infrastructure construction in the UK, has published data which shows workloads have collapsed in the last six months.

CECA’s Workload Trends Surveys and 2018 Q4 and 2019 Q1 both showed contractors’ workloads were falling, with declines in activity reported by 17 per cent of British firms, on balance, in the first quarter of this year. Such a large decrease has not been seen since 2012.

The news comes on the back of widespread delays to projects across the country, from large projects including HS2, rail electrifications and upgrades to the country’s motorways, to smaller regeneration schemes that have been held up by uncertainty over Brexit.

Commentating, CECA chief executive Alasdair Reisner said: “Right now our members should be going hammer and tongs, delivering vital upgrades to the nation’s essential networks. Industry has geared up to deliver a wave of work that has never materialised.

“Our worry is that the Government’s public commitment to infrastructure is crumbling behind the scenes, with other political priorities meaning that this vital driver for growth and social wellbeing is being sidelined.

“The seemingly never-ending uncertainty regarding the UK’s future relationship with the European Union is having a clear and unambiguous effect on business confidence. “At a time when the UK Government should be ensuring the infrastructure sector is driving growth in the economy, all we are seeing is delay upon delay to schemes, and prevarication when it comes to future investment.

“We call on the Government to take concrete steps to reverse this downward trend, by getting on with the delivery of projects that it has already publicly committed to deliver, unlocking jobs and growth across the country.” 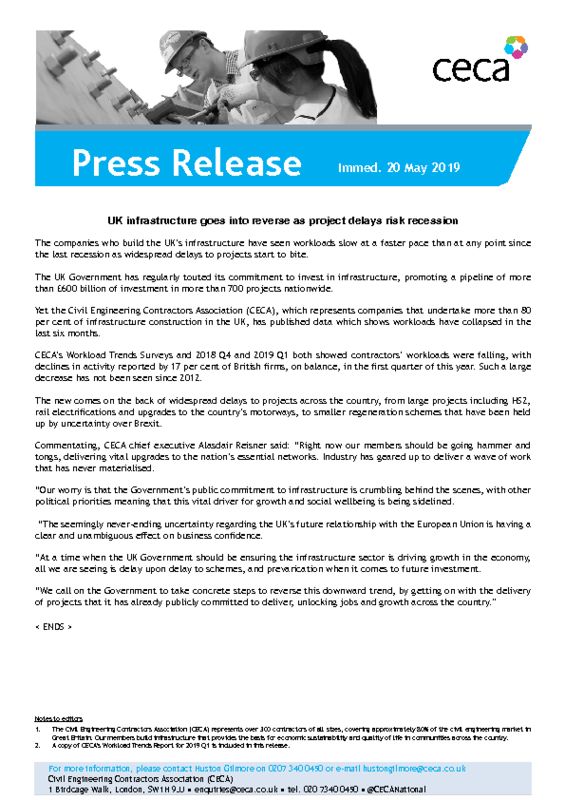