Civils contractors today welcomed the UK Government’s announcement that over 100,000 unemployed young people have been helped into work through the Kickstart Scheme.

Kickstart is part of the UK Government’s wider Plan for Jobs initiative. The figures released today by the Office for National Statistics (ONS) show the scheme is working, with an increase in the number of people now on the payroll – over 29 million – and unemployment falling to 4.3%.

To mark this Kickstart milestone the UK Government has called upon some of the young people involved in the scheme to come together to make a video which can be viewed here.

Today’s Kickstart announcement coincides with employers having one month left to apply for new Kickstart positions.

Commenting, Director of the Civil Engineering Contractors Association (Midlands) Dawn Karakatsanis said: “CECA has acted as a gateway organisation since earlier this year, and we’re proud to have assisted our members in placing many young people on their path to a rewarding and successful career in the construction industry through this means.

“CECA’s Kickstart gateway has now closed for new positions but we would like to remind members that they still have another month to apply to the scheme directly.

“We would urge our members who have yet to take up the scheme to do so, and to get in touch if they have any questions about how they might go about helping the next generation of UK construction begin their careers through the scheme.” 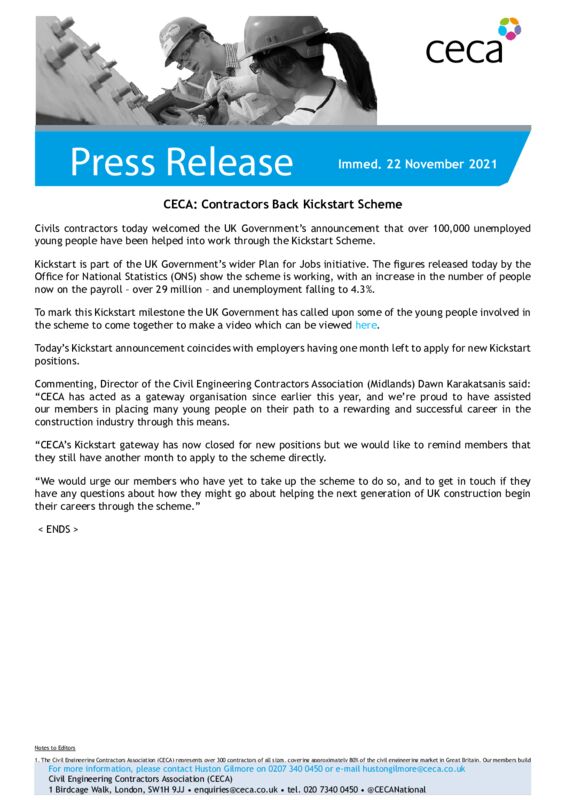